My father served on an aircraft carrier in the Pacific.

If Truman had not authorized Hiroshima and Nagasazki, statisticians at the time estimate that a million American lives would have been lost. The Japanese were ferocious fighters. They were likely to fight to the last man, and take as many American lives in the process as they could.

My father might not lived through the war if Truman had not dropped the bomb.

It was a good shoot.
M

I wouldnt be here today if we didnt use it. 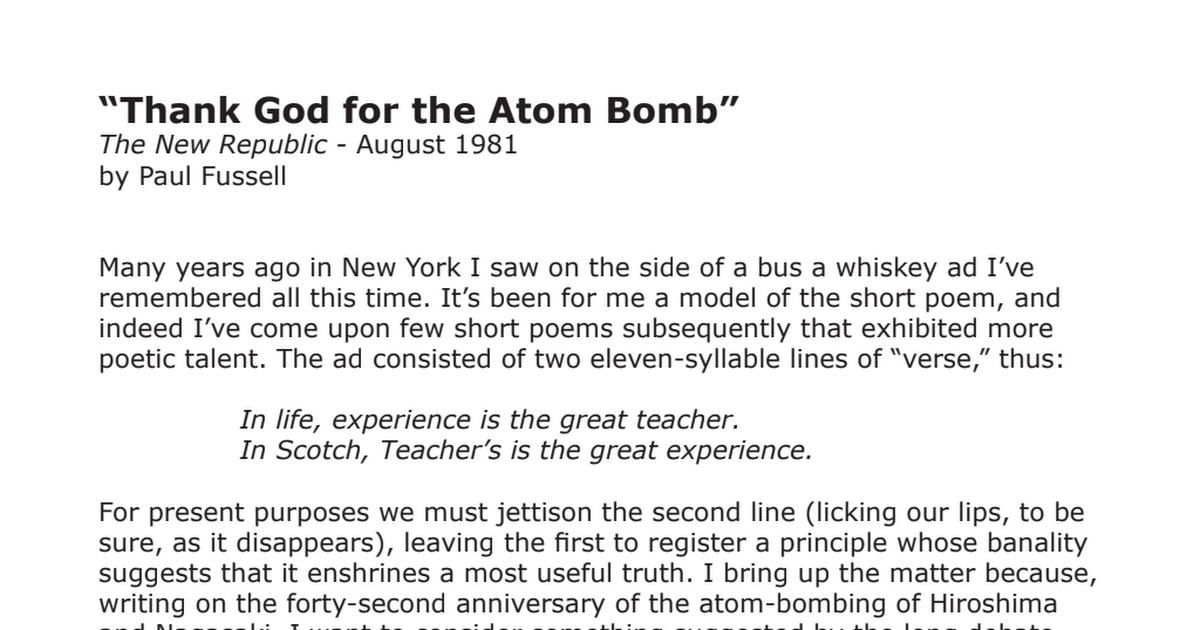 My son lives in Hiroshima. He says millions visit the shrine there on this day.

Lot's of leftist look through the lens of the 21st century, peace and safety, inclusiveness, etc.... and condemn what happened.

BUT they never look through the eyes of 1945. When the US ordered Purple Hearts to give out to the dead and wounded for the coming invasion. They were still using that order in Vietnam.

Patton's philosophy rings true. Make the other guy die for his country. It did, and ended the war.

We think in terms of US lives, but dropping the bomb probably saved a bunch of lives on the Japanese side as well. Most of the island hopping consisted of killing every Jap, to a man. Imagine what it would have been on the mainland.
P

Remember Pearl Harbor and they started it by attacking us. The captan of the attacking fleet is quoted as saying that day "We have awoken a sleeping giant".
Maybe we should be telling corrupt in DC do they deare wakeup the sleeping giant?
Last edited: Sunday at 9:49 AM

I would like to think that the giant is just waking up and looking for that first cup of coffee. Here is hoping he finishes it by the second week in November.
Last edited: Sunday at 8:41 AM

Barb said:
My son lives in Hiroshima. He says millions visit the shrine there on this day.
Click to expand...

Sorry, they continued to fight long after their leaders knew they lost and the bomb not only saved our men that would have been used in any invasion, but millions more Japanese

Bps1691 said:
Many American vets graves go unvisited every year as more of the WWII vets children die off

Sorry, they continued to fight long after their leaders knew they lost and the bomb not only saved our men that would have been used in any invasion, but millions more Japanese

My fathers ship would have been part of that invasion and there’s a good chance he would not have survived
Click to expand...

While generally vets graves are visited on Memorial Day, my dad a WWII vet will be visited today. It's memorial day at the cemetery he, and mom is buried in. Old fashion Southern tradition.

Secondary to that is the distance we have to travel to visit, those killed in combat. Have a cousin buried in France at a US cemetery. Never going to happen, and I suspect his parents never visited him, either.

But Hiroshima is on the mainland/home, and it is much easier to visit there than if they died in say, Mongolia.
M

Another failed attempt at white guilt.

Many Asians are still pissed that the US did not nuke all the Japanese cities. Still quite a lot of hatred for Japan even from the current generation.

Japanese writers are still trying to wipe away the horror they did to all the other countries and re-write history.

wait-n-see said:
Japanese writers are still trying to wipe away the horror they did to all the other countries and re-write history.
Click to expand...

The reactions from other countries to those "events" was what enabled all the horrific crimes committed by state agencies the rest of the 1900s. A horrendous crime down openly by the Turks, and the future killers noticed and remembered.

Truly amazing that the survivors actually stayed sane and still were able to live fruitful lives while at the same time seeing the world not only ignore what had happened to them but to even bury the event from history.

My father got in at the very end of the war, he enlisted in the navy in early july of 45 on his 17th birthday and was in basic when Hiroshima and Nagasaki were lit up. He ended up on an LST during the occupation and an antiaircraft cruiser while we were helping to get the nationalist chinese off of the mainland. Had Truman NOT ordered those cities bombed I am sure my father would have been floating on something "haze grey" off the coast of japan fighting off the divine wind during the invasion. Who knows what his chances would have been. but I suspect not good.

Every August 6 and August 9 I raise a glass or two of Knobs creek bourbon to the sky and utter these words.

Those words are heartfelt and sincere. As someone with a lot more brains than me once said "War is hell".

What is often overlooked is that besides the thousands of civilians in the city (which brings up the whole concept of "responsibility to protect" or "R2P") Hiroshima, as well as Nagasaki, were both parts of Japan's military industrial complex with factories, ship and rail yards and active harbors.

The Second General Army was headquartered in Hiroshima and responsible for the defense of the southern area of Japan (including setting up guerilla cells post invasion) which was the first part of the US invasion plan/Operation Downfall. 20,000 Japanese military combatant personnel were killed in the attack and Second Army ceased to exist as a fighting force, only able to conduct relief and security operations within the area. (That being said, the munitions factories on the city's outskirts were largely untouched by the effects of the weapon.)

Just my usual teasing bout yer morphing avatar; perhaps, in hindsight, given that this is not your usual lighthearted change my comment should not have been so either, eh.
Sorry.

bw said:
If that was responding to an individual it's not clear.
Click to expand...

Yeah, well, the avatar owner is a little slow ...
D

We did the right thing. The purple hearts my brothers got in Vietnam were made for the soldiers and airmen who were going to invade the Japanese island.

I remember reading somewhere back in the 1980s where a redneck was quoted as saying he only knew two Japanese words: Hiroshima and Nagasaki.

Jeancat’s father fought in the Aleutians, Kwajalein, Philippines, and Okinawa. He had a Purple Heart, bronze star, arrowhead (beach landing), and was in the occupation of Korea, He was on Okinawa when news of Hiroshima came. He later said if we had invaded there is no doubt he would be dead. He ran the BAR in his unit on Okinawa. He was one mild tough customer. Would hardly ever say anything about about his service. He worked at forgetting about. He undoubtedly had PTSD. Stress got to him. When going to his son’s wedding and having to navigate Houston’s interstates as a passenger, he would just hang his head and close his eyes and mutter about all the Japs that were around him. When a tornado passed through Mississippi along the Natchez Trace near his house, he drove someone down to look at the damage and started shaking and had to leave because the stripped trees reminded him of the islands. Those vets paid a high price for their service. I regret Hiroshima but I am ok with it.
You must log in or register to reply here.
Share:
WhatsApp Email Link
Top