SHE should just change parties. 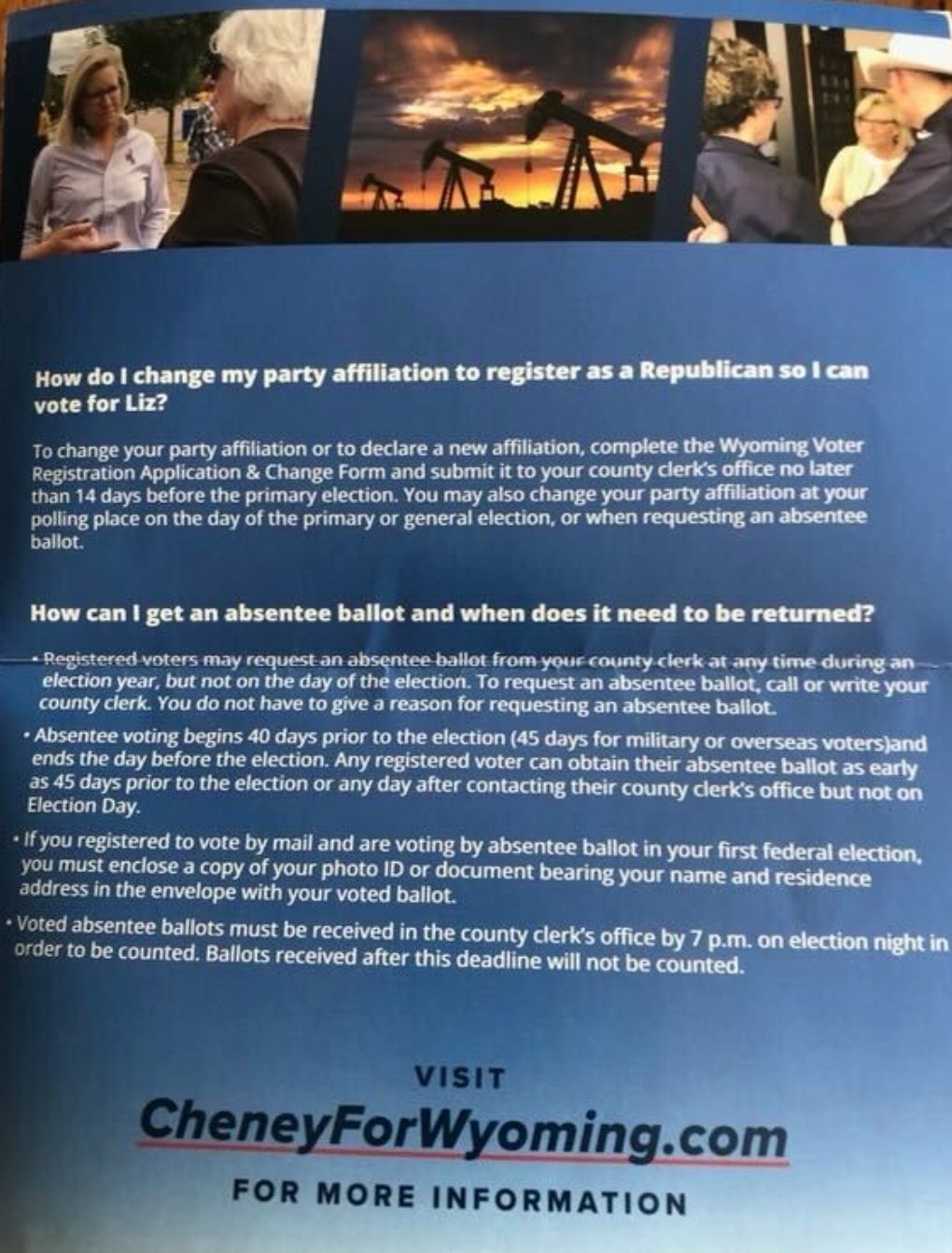 Kanekoa on Gab: 'NEW - Liz Cheney is sending mail to Wyoming Democrats with instructions on how to switch parties to vote for her in the state's August primary. Wyoming polls show Cheney trailing well behind her challenger, Harriet Hageman, who is endorsed by @realdonaldtrump... 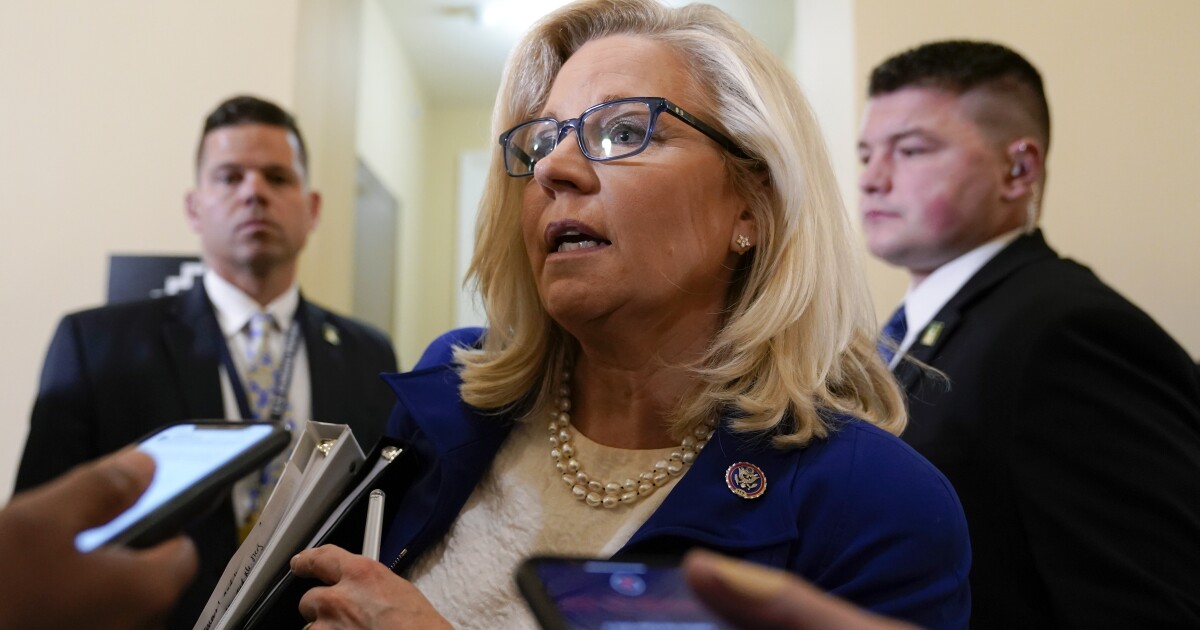 Rep. Liz Cheney (R-WY) is sending mailers to Wyoming Democrats with instructions on how to switch their political parties ahead of the state's primary in August.

Rep. Liz Cheney (R-WY) is sending mailers to Wyoming Democrats with instructions on how to switch their political parties ahead of the state's primary in August.

News of the mailers comes as Cheney faces a tough primary challenge by Harriet Hageman, who is endorsed by former President Donald Trump, while the incumbent helps lead a summer slate of hearings held by the Jan. 6 committee.

The instructions, which are also available on Cheney's campaign website, provide answers to two questions: "How do I change my party affiliation to register as a Republican so I can vote for Liz?" and "How can I get an absentee ballot and when does it need to be returned?"

] bona fides and the campaign mailers while maintaining that her campaign was merely informing voters about registration rules.

“I’ve been a conservative [

] Republican since I first voted for Ronald Reagan in 1984,” she declared in a statement to the Washington Post. "I encourage everyone with principles [

] who loves our country [

] to exercise their right to vote. And, damn right, I will continue to give every voter in Wyoming a list of all the key rules for casting ballots in our state. If any eligible voter living in Wyoming wishes to become a republican, they are free to do so. That is their right.”

Primaries in the Cowboy State are slated for Aug. 16, and voters will have 14 days before the primary is held to change their party affiliation.

Joseph Barbuto, the chairman of the Wyoming Democratic Party, said he has seen social media awash in Democrats talking about receiving the mailers, according to the New York Times. “I haven’t had any Republicans share online or tell me that they received it,” Barbuto said on Thursday.

Cheney told the same news outlet in February that she would consider such a step, according to the report, which noted she said it was "not something that I have contemplated, that I have organized or that I will organize.”

Cheney, the daughter of former Vice President Dick Cheney, is one of five Republicans who broke with the vast majority of their party to support Trump’s impeachment and now face uncertain futures in Congress ahead of the 2022 midterm elections, along with Peter Meijer (MI), Dan Newhouse (WA), Jaime Herrera Beutler (WA), and David Valadao (CA).

A pair of recent polls funded by groups supporting Hageman show the Trump-backed candidate leading Cheney, according to the Casper Star-Tribune. Harry Enten, a senior data reporter at CNN, recently said Cheney has about a 10% chance of winning reelection.

Cheney's campaign has not responded to the Washington Examiner's request for comment.
H

how to switch their political parties

she should know how since she has done it herself

Yep, she sees the writing on the wall. I wonder if the dems will save her sorry arse?
D

August 16 is primary. Anything can happen before then. Da b___h is insufferable, but is a squid with long tentacles in that state. Daddy will pull all the muscle his rotten brain can instruct.

^Was going to be my single comment but I refrained..

Sherrynboo said:
Yep, she sees the writing on the wall. I wonder if the dems will save her sorry arse?
Click to expand...

I’d Have to guess a democrat is a pretty rare breed in Wyoming, she’s a bigger sheister than her dad. Can’t they get enough signatures to recall her?

Rumor is that it happened here in Idaho for the primaries. I would not be surprised at any level they will go to win.

Fenwick Babbitt said:
I’d Have to guess a democrat is a pretty rare breed in Wyoming, she’s a bigger sheister than her dad. Can’t they get enough signatures to recall her?
Click to expand...

Not as rare as you might think. Jackson, Laramie, and now Casper are going liberal.
P

This isn't the first time these type of shenanigans have taken place. Which begs the question, why does the local GOP ( aka stupid party) create rules that would prevent that?
W

She is behind in the polls by 30 points. She is done. Stick a fork in her cause she is toast.

Delusion is strong with her, it is.

Don’t let the Piss Ants get you down…

How do you go lower than begging DemonRats to change parties to voter for you in the GOP primary?

What is necessary for the GOP to eject member such as she and Kitzinger from the Party?

Parakeet said:
This isn't the first time these type of shenanigans have taken place. Which begs the question, why does the local GOP ( aka stupid party) create rules that would prevent that?
Click to expand...

They have tried here in Wyoming, but cant get it passed

Not even subtle about it. She thinks here constituents are that stupid.
D

Broken Arrow said:
Not as rare as you might think. Jackson, Laramie, and now Casper are going liberal.
Click to expand...

And Cheyenne, as the state capital, is always going to be Demonrat-infested.

This is no surprise. It just once again shows how evil the Demonrats are and how stupid Republikrats continue to be.

And of course this is the strategic policy which was cooked up long ago by Karl Rove and the Ol' man Big Daddy Dick Cheney happily ensconced in Jackson Hole. This law has been on the books for a while and Republikrats could've changed it anytime in the past two years but were just too damn ignorant to realize the consequences of not changing it.

All the Demonrats have to do to win the Republican primary for Cheney is to switch parties for the primary and work to cause the Republikrats to split the primary vote between the other two top candidates. Ergo, Cheney wins and goes on to victory as the Republican nominee in the general election.

Next election? What ... me worry? (To paraphrase Alfred E. Neumann) Undergo a complete change of heart and show oneself to be a true Republikrat who was misled by her patriotic instincts to protect her constituents and her country and she'll do better - while either being re-elected by a landslide or winning a Senate seat. Daddy's got it all planned out already for her.

Guess her hopes of Democrats saving her ass is crushed....