BRKG Attack on the FBI building in Cincinnati--Update: suspect dead identified by NYT as Trump supporter with extremist ties who was present@ Jan6

Ricky Shiffer joined Twitter and the Truth one only this year.

Hmmm, what was his internet presence before that, eh?

Do we have a real body?
T

Boy they hit the jackpot on him didnt they? Every single buzzword and an eeeeeebil AR15. Well...here we go.

Never get on the bus.

Me thinx this way too completely fits the narrative. Copycats coming?

bbbuddy said:
Yeah, nail guns have to be pressed against something to "fire" a nail. They don't fire nails like a gun does.
Click to expand...

Yes they do...
If you want to nail things quick, the depression safety can be wired back, had a few nail gun wars back in the day.
House to house even...lol

Stop the world, I want to get off.

as is anyone with more than 2 functional brain cells . . .

Hammer said:
So the guy had an AR-15, and was dedicated to his cause enough to use said AR-15 during the chase, but used a nail gun when shooting at the FBI building instead of said AR-15. Sounds reasonable.
Click to expand...

Maybe the fbi provided the crown vic and a defective AR for the mark. Hell, it could have been an airsoft rifle but we will never know the truth. Just curious what would the maximum range for a lethal and accurate shot with a modified nail gun one to three feet maybe?
B

mzkitty said:
Who writes these scripts?

Don't know who writes them, but the proof-reader tore out the pages about the hollow point nails.

I'm certain they have a folder full at the ready. Bad enough that they are bastards, but stoopid bastards is salt in the wound.

somewherepress said:
Me thinx this way too completely fits the narrative. Copycats coming?
Click to expand...

The stooge was attempting to break through the bullet-proof glass with the nail gun. I doubt that he had some epiphany that brought him to that conclusion.

We'll never know who gave him that lame-brained idea but I bet that person cashes a goobermint check. Jmho

It will start like this with nutjobs coming out of the woodwork. Yes, there are plenty of crazies on our side too. The state will do what they always do and over-react.

In these times, my top 2 worries are
1) a crazy nutjob like this which will justify the left treating all Trump supporters as criminals and
2) Trump being assassinated

The media and sheeple eat this kind of news right up. It's proves their script is accurate.

Interesting that the FBI and black gangs have this in common.

mzkitty said:
He be daid now. You knew it.


CLINTON COUNTY, Ohio — Authorities say the armed man wearing body armor who tried to breach the FBI building in Cincinnati Thursday has died after being shot by law enforcement following an hourslong standoff.

According to the FBI, the man attempted to breach the FBI visitor screening facility just after 9 a.m. The man fled after an alarm was triggered and he was confronted by agents.

Once troopers got behind his vehicle, the suspect fled and a pursuit ensued. While behind the vehicle, a suspected gun shot was fired from inside the suspect's vehicle.

The Ohio State Highway Patrol said the pursuit continued on I-71 until the suspect excited at state Route 73, traveling eastbound before turning onto Smith Road.

The suspect's vehicle came to a stop around 9:53 a.m. on Smith Road near Van Trees Road in Clinton County. He then exited the vehicle and exchanged gunfire with authorities.

Law enforcement said they were able to ‘contain’ the suspect and attempted to negotiate turning himself in to authorities.

The Ohio State Highway Patrol said those attempts were unsuccessful and authorities attempted to move in and take the suspect into custody.

Authorities then attempted using “less than lethal” tactics but were still unsuccessful.

The suspect then raised his weapon and law enforcement opened fired, according to the Ohio State Highway Patrol. He was pronounced dead at the scene. His identity has not been released at this time.

Portions of Interstate 71 and state Route 73 were closed for several hours but are now reopened. Portions of Smith Road will remain closed.

The confrontation at the FBI's Cincinnati field office comes as officials warn of an increase in threats against federal agents in the days following a search of former President Donald Trump’s Mar-a-Lago estate in Florida.

On Gab, a social media site popular with white supremacists, users have warned they are preparing for an armed revolution.

Federal officials have also been tracking an array of other concerning chatter on Gab and other platforms threatening violence against federal agents. FBI Director Christopher Wray denounced the threats as he visited another FBI office in Nebraska on Wednesday.


“Violence against law enforcement is not the answer, no matter who you’re upset with,” Wray said Wednesday in Omaha.

The FBI on Wednesday also warned its agents to avoid protesters and ensure their security key cards are “not visible outside FBI space,” citing an increase in social media threats to bureau personnel and facilities. It also warned agents to be aware of their surroundings and potential protesters.

The warning did not specifically mention this week’s search of Mar-a-Lago but attributed the online threats to “recent media reporting on FBI investigative activity. 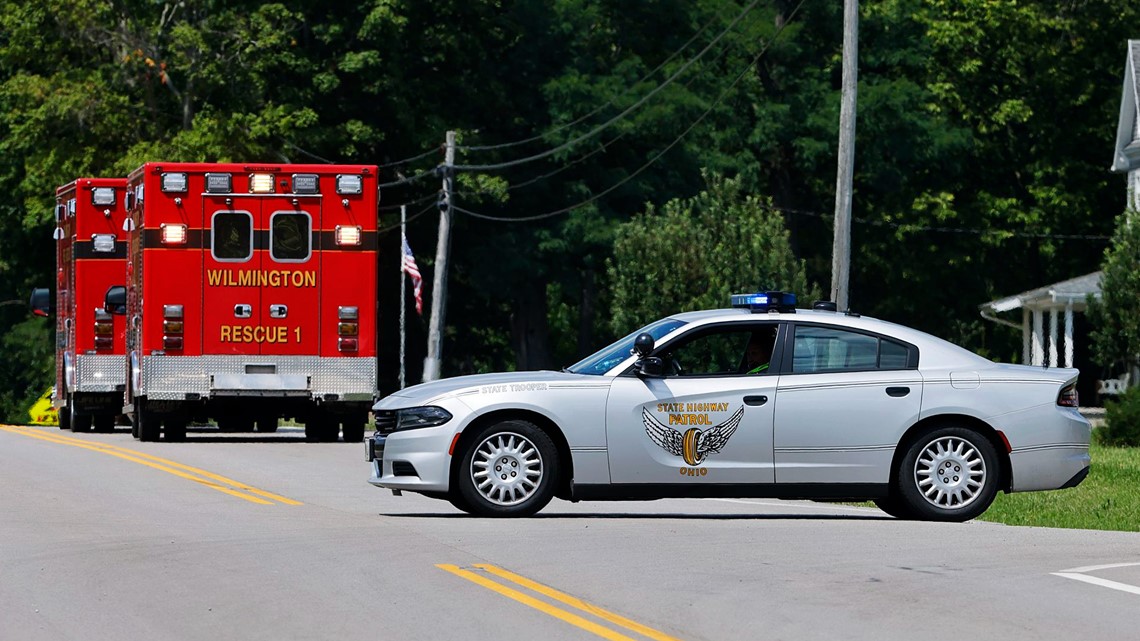 The suspect was identified as 42-year-old Ricky Shiffer, of Columbus, according to the Ohio State Highway Patrol.

How convenient. Now they can paint all kinds of pictures about him and the shooter cant say a word about it.

This was certainly a setup. As previously reported by TGP’s Cassandra Fairbanks, Ohio State Highway Patrol exchanged gunfire with an armed man attempting to break into the FBI building in Cincinnati on Thursday morning. The man, now identified as Navy veteran Ricky Schiffer, 42, was allegedly carrying an AR-15 and shooting...

As previously reported by TGP’s Cassandra Fairbanks, Ohio State Highway Patrol exchanged gunfire with an armed man attempting to break into the FBI building in Cincinnati on Thursday morning.
The man, now identified as Navy veteran Ricky Schiffer, 42, was allegedly carrying an AR-15 and shooting into the building with a nail gun.

“At approximately 9:15 EST, the FBI Cincinnati Field Office had an armed subject attempt to breach the Visitor Screening Facility (VSF),” FBI Cincinnati said in a statement. “Upon the activation of an alarm and a response by armed FBI special agents, the subject fled northbound onto Interstate 71.”
At about 12:30 p.m. local time, the agency said Schiffer was “contained” but not in custody, according to a report from NBC News.

Schiffer took off on I-71 towards Columbus and the pursuit eventually ended near W. State Route 73, according to a report from Fox 8.
The standoff ended in a cornfield.
Ricky Schiffer was killed in the standoff.

On Friday it was reported that Schiffer was on the radar of federal authorities for months because he may had been at the US Capitol on January 6.
The feds were investigating Schiffer not because he committed any crimes, but because he attended a pro-Trump rally at Black Lives Matter Plaza in DC on January 5.
The New York Times reported:

COLUMBUS, Ohio — A man whom the police say they killed hours after he tried to breach the F.B.I.’s Cincinnati office had been on the radar of the federal authorities for months, two law enforcement officials said on Friday.
The officials said federal investigators had been looking into whether the man, Ricky Shiffer, 42, of Columbus, had been involved in the Jan. 6 attack on the U.S. Capitol.
Law enforcement officials separately said they were investigating whether Mr. Shiffer appeared in a video posted on Facebook on Jan. 5, 2021, showing him attending a pro-Trump rally at Black Lives Matter Plaza in Washington the night before the Capitol was stormed.
Click to expand...

Neither here nor there.

wait what??? He has an AR15 style rifle BUT chooses to fire a nail gun into the building instead? What am I missing here?
L

packyderms_wife said:
wait what??? He has an AR15 style rifle BUT chooses to fire a nail gun into the building instead? What am I missing here?
Click to expand...

In one of his reported statements he "thought he had figured a way to get through the glass". Summary, not exact words.

I assume he made the leap from a small windshield breaker and extrapolated up to the nail gun for super-duper goobermint glass.

My earlier post suggested he had help. My opinion hasn't changed.

Sheer BS. False Flag.
I want to see the last three generations of his family and pics.....with stories from the living ones.

I'd bet he does not truly exist as stated, and is not a dead man. Crisis actor, in a leading role.