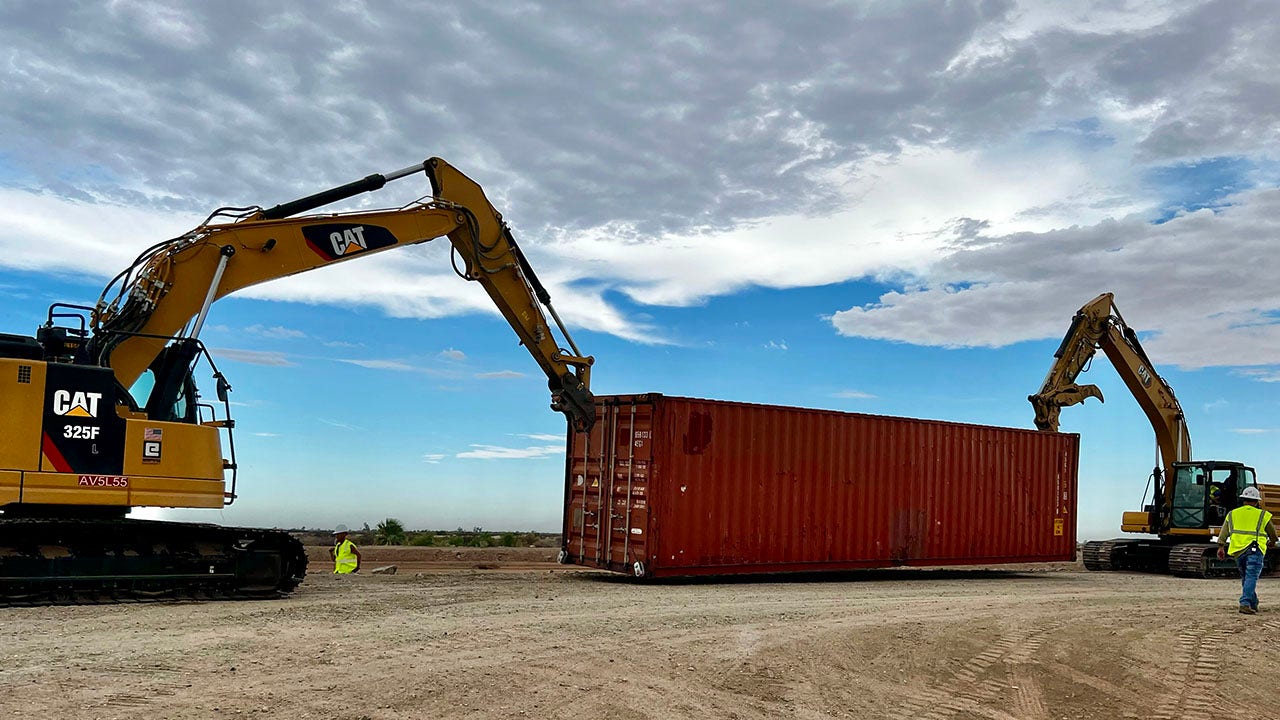 The governor of Arizona has started to fill gaps in border wall construction in Yuma, filling unfinished parts of the wall with shipping containers topped with wire.

The construction, which began hours later, consists of 60 double-stacked shipping containers, welded shut and topped with four feet of razor wire. His office said that it is 22 feet tall and weighs nearly 9,000 lbs.
"Arizona has had enough," Ducey said in a statement. "We can’t wait any longer. 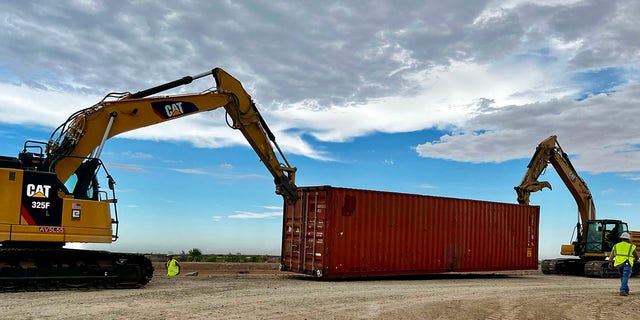 Construction begins to fill gaps in the border wall in Yuma, Arizona, on Friday, Aug. 12, 2022.
Ducey went on to blame the Biden administration’s "lack of urgency on border security," calling it a "dereliction of duty."
"For the last two years, Arizona has made every attempt to work with Washington to address the crisis on our border. Time and time again we’ve stepped in to clean up their mess. Arizonans can’t wait any longer for the federal government to deliver on their delayed promises," he said.
Ducey’s office said that the project is expected to be completed over the weekend.

There have been more than 200,000 migrant encounters along the southern border in each of the last four months. Recent data obtained by Fox News show that Yuma Sector has seen a 242% increase in encounters so far this fiscal
year compared to last year.

Ducey’s office said that nonprofits in Yuma County have been overwhelmed, with capacity ranging from 115%-160%. The move was welcomed by Yuma Mayor Doug Nicholls.


"Yuma has experienced the worst of the border crisis. We’re grateful to Governor Ducey for ingraining himself in this issue and finding solutions," said Nicholls.

The plugging of the gaps is separate from a move announced last month by the Department of Homeland Security (DHS) to close four border wall gaps in Yuma — this time at Morelos Dam. The move came after Sen. Mark Kelly, D-Ariz., had pushed for the Biden administration to close those gaps.

"This is a step forward and I’ll keep working to ensure that Arizona has the tools needed for a secure and orderly process at the border including fencing and barriers where they make sense," Kelly said in a statement.

The Trump administration began construction of a border wall to combat illegal migration, building over 450 miles. However, the project was immediately halted by the Biden administration, leaving yawning gaps in the wall through which migrants have entered the U.S.

Since canceling the contracts, the administration has been wracked by massive migrant numbers that have overwhelmed border communities and caused a major political headache for the White House. DHS said it will address environment damage caused by the wall and fill some remaining gaps.
Fox News' Bill Melugin contributed to this report.

Adam Shaw is a politics reporter for Fox News Digital, with a focus on immigration. He can be reached at adam.shaw2@fox.com or on Twitter: @AdamShawNY
M

It’s better than nothing.

Must have watch Colony series.

Is that to keep us in? Cause they sure as hell aren't trying to keep people out.

I wonder how fast you can dig a 10 foot long tunnel under them in the dirt? Or if they are securing the razor wire to the top using the 4 corner post connectors on each CONEX box? Otherwise someone could come alone, toss up a rope with a hook or two on the end, and pull the razor wire off.

I mean, don't get me wrong, I want a secure border, but I'm wondering how much of a border this actually would be with either someone with a trenching tool, a few shovels, or even someone with a shovel, a truck with an inverter and a shop vac to pull the dirt out real quickly.

ETA: Or for that matter, one chain to the top, from a front bumper of a truck, and pull it over on its side so it is now laying in Mexico. Now you can easily remove the razor wire and you only have an 8 foot box to crawl over...

They also need to think about the cartels using the tops of them as shooting platforms...

Double_A said:
Is that to keep us in? Cause they sure as hell aren't trying to keep people out.
Click to expand...

I'm beginning to wonder just that though since there is a certain bunch of Dem support for a wall down there now...
C

At least that Governor is not assisting The Invasion by busing up the illegals and sending them to Washington DC and other states!

Anything that digs under a shipping container must be a prairie dog, shoot it.

Ducey is like Abbott. Always behind the wave. But at least AriIona will gat rid of him this year. Not so for Texas. We will get stuck with to-late Abbott again. But that is better then Butthole Beto.

What is going to stop the cartels or anyone from cutting holes on the mexican side, so people can hide in them unseen, then cutting or torching holes to get out on the US side?

LoupGarou said:
I wonder how fast you can dig a 10 foot long tunnel under them in the dirt? Or if they are securing the razor wire to the top using the 4 corner post connectors on each CONEX box?
Click to expand...

Doesn't matter. It's all about the optics. Looks good to those who don't have an inquiring mind.

"We're taking steps" beats "We haven't addressed this yet" in the arena of public disclosure.

"We're sorry. Due to the border wall reinforcement there is now a shortage of containers and we're doubling our rental cost."

Plus Buttigieg gets yet another "get out of jail free" card handed to him.

"We can't address the supply side shortages until the shipping container shortage is resolved."

Ducey is the one who made the claim:

There will be no decertification of the 2020 election — the audit does not call for one, and even if it had, there is no lawful way to decertify. As we have every step of the way, Arizona will follow the law.
Click to expand...

Not true and spoken as a true "Never-Trumper."

greysage said:
What is going to stop the cartels or anyone from cutting holes on the mexican side, so people can hide in them unseen, then cutting or torching holes to get out on the US side?
Click to expand...

Before being put in place the shipping containers are filled with manure.

greysage said:
What is going to stop the cartels or anyone from cutting holes on the mexican side, so people can hide in them unseen, then cutting or torching holes to get out on the US side?
Click to expand...

Tannerite. We can also razor wire our side. Gopher holes should be dusted with an irritant like cyanide.

Tannerite. We can also razor wire our side. Gopher holes should be dusted with an irritant like cyanide.
Click to expand...

Sure, but just like filling them up with manure, it will not happen.
D

its the under that they need to take care of now.

i see an entrepreneurial mind coming up with a catapult and cost effective disposable landing system now.
J

I personally know someone who simply crossed through an opened gate in a cattle fence. Recently.

Milkweed Host said:
Anything that digs under a shipping container must be a prairie dog, shoot it.

They are SO cute!
N

ONE alternative is to dig out this century's Pershing and Patton and kick off "War Plan Green".

Dozdoats
On TB every waking moment
Today at 5:11 PM

night driver said:
One alternative is to dig out this century's Pershing and Patton and kick off "War Plan Green".
Click to expand...

Digging up Pershing and Patton would be more likely. We do not have their equals today.

Just think thought ... it will be finished in a weekend. A WEEKEND. That must include the land prep for the foundation. And bolt those puppies together so they can't be pushed over like plastic baby blocks. Light 'em up with solar powered motion detectors.

Most of the coyotes will just transfer to another entrance of less resistance.
M

Hunybee, can't you just hear someone yelling "Pull!" just before that catapult is fired? (: (:

Until the incentives are stopped, for the illegal aliens to come to the ZUSA, nothing else is going to stop them, NOTHING.

Mexico is already here, probably 75% or more of
the Mexican population has been here for decades.
Its the OTM that are now invading.

Stop the bennies, that will at least slow the invasion
down enough, so that rigid law enforcement can
at least manage it.

A good portion of the illegals, are now being flown in.

The ZUSA is over, done, stick a fork in it,
having ended in November 2008, and there is no
going back, not going to happen. Only session of
the RED states, and a formation of a new republic,
will allow some peoples to have a better life.

Southern half of California, all of Arizona and
New Mexico being returned to Mexico via
The Reconquista, and Northern California,
east Oregon and east Washington, into the
new state of Jefferson. Western Oregon and
western Washington state, given to Canada.

Please be safe everyone.

Kurilla MIGHT be a candidate, having come out of Mike Yon's Deuce-4, and done time as CO of the Ranger Regiment. Yeah, I understand he has his second star but, ya know.......